You may remember from my Temple Street post that my band of foodie friends and I attempted to sneak into Tim Ho Wan “the cheapest Michelin starred restaurant” for a spot of dim sum. Hahahaha, some of you will exclaim, you can’t do that with 9 of you at 8pm, you’ll get ticket number 579 or something ridiculous! Silly moos!

Well, after said failed attempt, my regular lunch buddy P and I decided that we needed to be cleverer next time… Like a reconnaissance mission, we gathered information on what time it opened and how we could get our dim sum without a) queuing b) queuing c) queuing. Hmmmmm..

As most normal people work during the weekdays, it was down to me, J, P and G to do the dim sum taste test. We collectively agreed that as Tim Ho Wan opens at 10am, we should get there at 10am. We could of course have gotten there earlier, but that means sacrificing precious sleep time- you gotta weigh the pros and cons! Like little children on a school trip, we met up at Mong Kok station so we could all walk there together and not lose a key member of our group. J thought that it would be tactical if he went ahead first, grabbed a ticket and started queuing. Smart boy. So far so good P and I thought- we’re gonna be eating soon, *clap hands in glee*. As P is a Happy Valley girl and unaccustomed to wandering around Mong Kok in the daytime, this was a bit of an adventure and she affectionately coined this meal as “Ghetto dim sum”.

Sadly for us, our strategies failed. By the time we reached J, he was standing outside Tim Ho Wan with about 40 other people, holding the number 20 ticket. “After all our efforts!”, we wailed! But it was ok, because some people already had the number 50 ticket hehehe.  At this point it was 10.10am and the woman dispensing the tickets hadn’t even called out number 1 yet! It appeared that some eager beavers had been queuing since 8am and those lucky people were ushered in the moment doors opened and were still eating while the rest of us salivated and drooled like a pack of dogs. The queue was getting so immense that several small groups had resorted to standing in front of the 7-Eleven opposite, so they could still hear the lady shout out numbers.

Tim Ho Wan is in the Mong Kok district of Kowloon, situated in an alley, round the corner from an alarming number of shops selling what I hope are fake guns, bazookas, rifles and other army paraphernalia. It’s rather sweet that Chef Mak Pui Gor, former dim sum chef at the Four Seasons and the intelligence behind this restaurant, decided to set up shop in this random place, but I suppose it’s to prevent mass food hysteria on the streets.

The minutes ticked by slowly. People were striking up conversation and asking each other if they’d been there before, what ticket number did they have, what should they order. Everyone sighed everytime someone got to go in and eat. We realised after 30 minutes that there were order forms we could fill out. Genius! Think about what you want to eat, fill out the forms, when you are finally seated give the waitress your form and voila! food is served, no time wasted. There are both English and Chinese food order forms which is great, especially for those of us whose one Chinese lesson a week for 5 years only gave us the ability to write our names in Chinese. For one American who had bravely turned up on his own to sample some dim sum, he resorted to asking random girls what to order and how to say number 16 in Cantonese so he could recognise his number when it was called! Awwww.

In total, we were hovering outside the restaurant for 1.5 hours before number 20 was called. For the last 30 minutes, we were reading the newspaper, books and wandering to the nearby vegetable market to stretch our legs. When our time came, a slightly hysterical “Yay!” slipped out from my lips and the 4 of us pushed our through the crowd to the front. The ticket woman told us that only 3 could be seated first whilst the 4th had to wait for a bit while the neighbouring table finished their food. J nobly volunteered himself as the 4th person and he had to wait for an agonising 5 minutes before he could eat.

In the meantime, P, G and I squished ourselves onto a side table, brandished our order form in the air and thirstily downed our cups of tea.

The first dish was my meat and salty and preserved egg congee which was delicious and piping hot. The 2nd dish was prawn cheung fan (vermicelli roll), which was good but standard dim sum fare.

The 3rd had us cheering and very excited. It was their famous baked barbecue pork/ char siu bun which had an exquisite sugary glaze on the pastry and a gorgeous BBQ pork filling- tender and full of flavour. You can’t complain for only $12 a basket, so we had another round of buns!

The rest of the dishes that came was good but like the cheung fan, all of them were like from any other high quality dim sum restaurants and didn’t stand out like their char siu buns. We were also disappointed with their pan fried turnip cake (lo baak gou), which was really bitter for some reason, but I think it was the fault of the turnip and not the cooking.

We ended our meal with the steamed egg cake (ma laai gou), the tonic medlar and petal cake (a pretty looking jelly like pudding made from jasmine tea- lovely) and a scrumptious sweetened taro cream with sago pudding which I had all to myself. 🙂

The damage was $217 for 4 of us- a wonderfully cheap and satisfying meal.

What’s the verdict? I think that everyone should go and experience this ghetto dim sum place at least once and immerse yourself in the frenzied queuing. I would definitely recommend planning your “trip” in advance and getting there as early as possible. Also, if you like the char siu buns, order excess and you can take it home as leftovers. We noticed lots of people in the restaurants blatantly over ordering, only to eat a few mouthfuls and carting the rest of the food back home in polystyrene boxes. I imagine they do this to feed the rest of their friends and family who are too big in number to ever get a seating this side of the century.

As for me, I am chuffed we managed to eat there and I’m very happy I ate the char siu buns. But I doubt I’ll be madly queuing outside Tim Ho Wan in the near future. 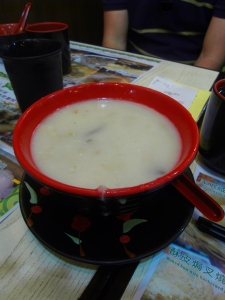 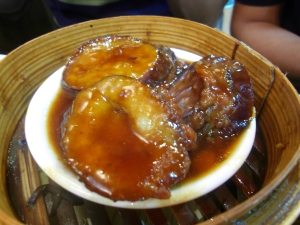 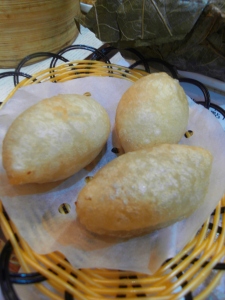 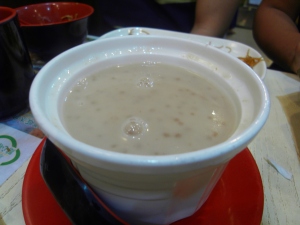