The Easter food foraging continued yesterday with J making a reservation for 9 of us at another Japanese Izakaya called Sakaegawa.

This place is part of G’s ongoing Izakaya quest and I was surprised to find that it was also in Causeway Bay. I’m beginning to think Izakayas don’t exist anywhere else on the island except around Times Square, and I wonder if it’s because they like the fresh seafood from the fish market on Bowrington Road, or whether all the Japanese chefs just decided that they liked the bright lights of Times Square! Anyway, whatever the reason, I’m happy as it’s easy to get to and you can always do a spot of shopping or pet shop gazing after your dinner.

Unbeknownst to me (until after the meal),  Sakaegawa used to be the fine dining Japanese restaurant at the Ritz, and it took nearly a year after the hotel closed down before the restaurant reopened independently. It’s tucked away inside a building off Hennessy Road, which took our friend Q, J and I a bit of time to find, partly due to lack of sense of direction and trying to follow Google maps on the Blackberry.

When you enter Sakaegawa, you will be struck by the quaint and simple decoration; the Japanese maps on the wall and the curious planks of wood hanging from the ceiling which add to the charm. Everyone was starving as usual, so it was only natural that G and P ordered almost the entire menu for us. One thing that did raise a few eyebrows was the strange heading of “STARCH” on the menu. I mean, I know carbs are everyone’s weakness, but do you need to make us feel guilty by spelling it out so blatantly like that?! 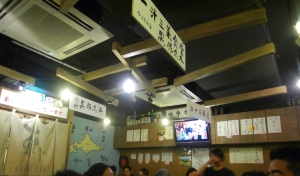 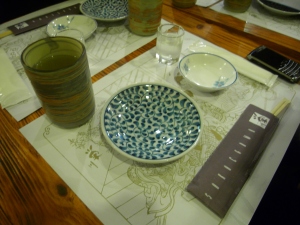 Our friend Q was extremely excited when she spotted marinated squid.

When the squid came, it looked very nondescript in its tiny bowl but the taste woke me up with its saltiness and dried fish taste.

Q the marinated squid expert declared that this squid was good and salty and as she was enjoying it so much, we gave her the rest of the squid to munch on.

Next up was the most expensive item on the menu at $380, the sashimi platter.

My half of the table kidnapped it, so the other half had to order one for themselves.

The sashimi was lovely and fresh. I especially liked the salmon which was thickly cut and just the right kind of fatty.

Highlights were the dried blowfish– yummy and tasted like Bee Cheng Hiang’s baakwa (BBQ meat), dried minnow fish– addictive snack like dish, agedashi tofu, sliced pork with udon noodles in soup (the soup was quite moreish) and the soft shell crab  and california sushi rolls which I loved, but I suspect it’s because I am a mayo addict and I still had a sore throat, so the mayo was soothing! 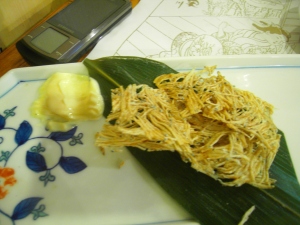 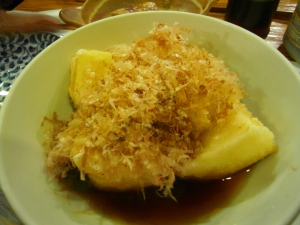 The guys also loved the black cod, which J said was very good, and the grilled eel and ox tongue on skewers.

Krispy K selfishly ordered only 1 foie gras on toast which turned out to be the size of a mini doughnut so she just ate that one all on her own. Apparently it tasted very yummy.. (Thanks Krispy for sharing 😛 *joke*).

I have it on good authority from P that Sakaegawa missed out on one of the classic dishes called 出汁巻き卵 in japanese which means egg roll cooked with fish stock. Apparently most izakayas would have it and it is “soooooooo good”, so P was a bit sad that that wasn’t on the menu.

After ordering a second round of sushi, skewers, salad and chicken wings, we asked the waiters if we were the worst group they’d had in terms of greediness, but apparently we were pretty tame compared to some!

G was the sake man of the night, flagging down the waiter for sake recommendations, but I sadly couldn’t tell you what kind of sake was drunk, except there were 2 types last night and everyone seemed fairly loud and merry by the end of it.