When it comes to hotel restaurants, I’m always a tad wary. Sure, the quality of the ingredients is most of the time top notch, but are we paying for the privilege of eating at an elegant location and for the assumed exemplary service or  is the food really worth the $$$$? In Tin Lung Heen’s case, I can say that it’s probably worth the lightening of the wallet on a special occasion, given the ambience, cool views, fab presentation and some real stand-out dishes. You can also read this review on Sassy.

Tin Lung Heen is one of those restaurant names that gets casually dropped into a conversation and anyone who’s heard of it, gushes about it regardless of whether they’ve been or not. Since earning its Michelin star after eight months of opening, it’s been on my hit list and this month, I finally managed to see what all the big fuss is about.

Tin Lung Heen looks more like the serious, commanding older brother of Tosca with its sombre, burgundy tones, wooden panelling and red leather backed chairs, with infusions of Chinese influences. The whole interior design is rather reminiscent of a study. The centrepiece of the restaurant is, of course, the magnificent view, but people don’t come here to just gawk at the skyline, the focus is on the food.

Chef Paul Lau, formerly of Spring Moon at the Peninsula, uses his expertise in Cantonese cuisine and gives traditional dishes a contemporary twist. The menu is quite extensive with a good variety of dim sum dishes on offer. If you’re a bit of a Chinese tea buff, you might be interested in perusing their premium tea menu. 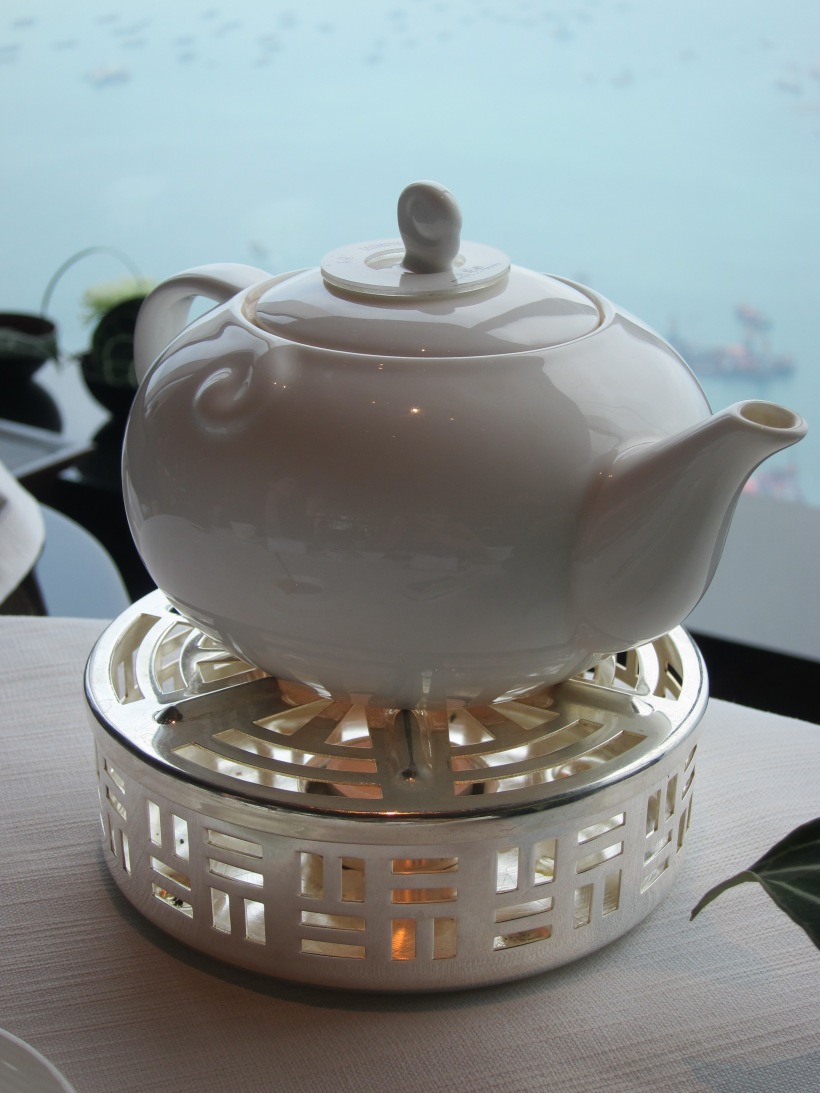 Service is excellent, as to be expected, with the usual attentive waiters happily refilling your tea at every opportunity. The entire meal was a demonstration of refinement and impeccable presentation, starting off with three delightful dim sum dishes- golden shrimp dumplings with bamboo shoots and asparagus, shrimp and vegetable dumplings with spicy cod roe and the utterly divine baked barbecued pork buns with almond crust. The pork bun crust was just like that of a po lo bao (pineapple bun); a beautifully light crunchy pastry with that delicious sweet crusting giving way to the barbecued pork within.

The double boiled chicken soup with fish maw, whilst refreshing and the chicken and maw tender, the soup itself was a tad too sweet and heavily infused by the coconut. The steamed crab claw with egg white in hua diao sauce was perfectly cooked and meaty, and the egg white silky smooth and of a good consistency. 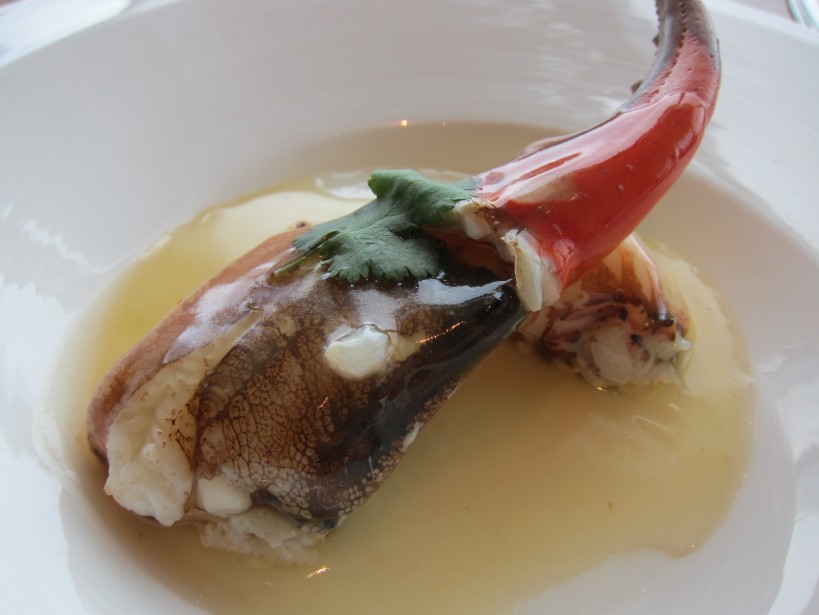 One of the most popular requests at Tin Lung Heen is the char-grilled barbecued Iberian pork (char siu) which was succulent and tender. As much as I wanted to, I couldn’t eat more than three or four pieces as it was still quite heavy despite the leanness of the pork. 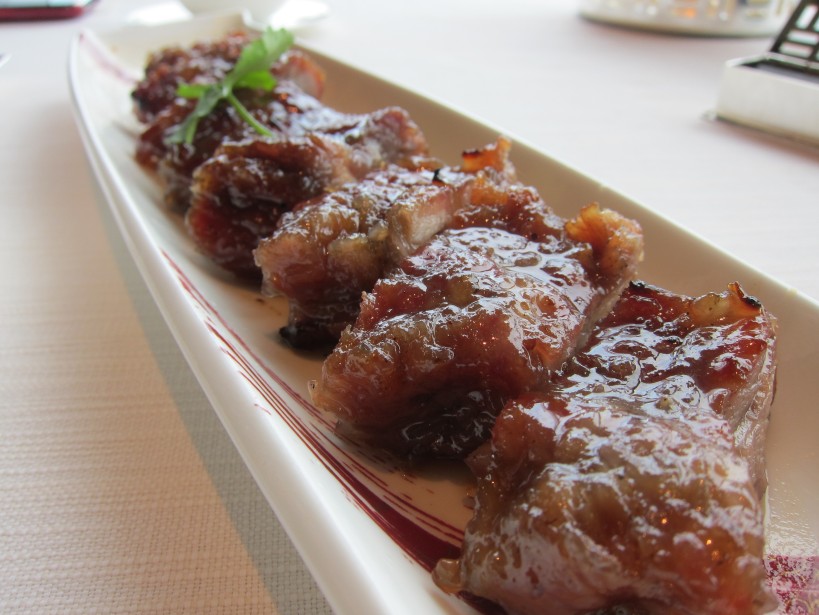 The last main dish was surprisingly innovative and delectable- the pan-fried kurobuta pork stuffed with foie gras. The mere mention of foie gras would tell you that this was a rich dish. Luckily there were only two small parcels to feast on, and I enjoyed every morsel. 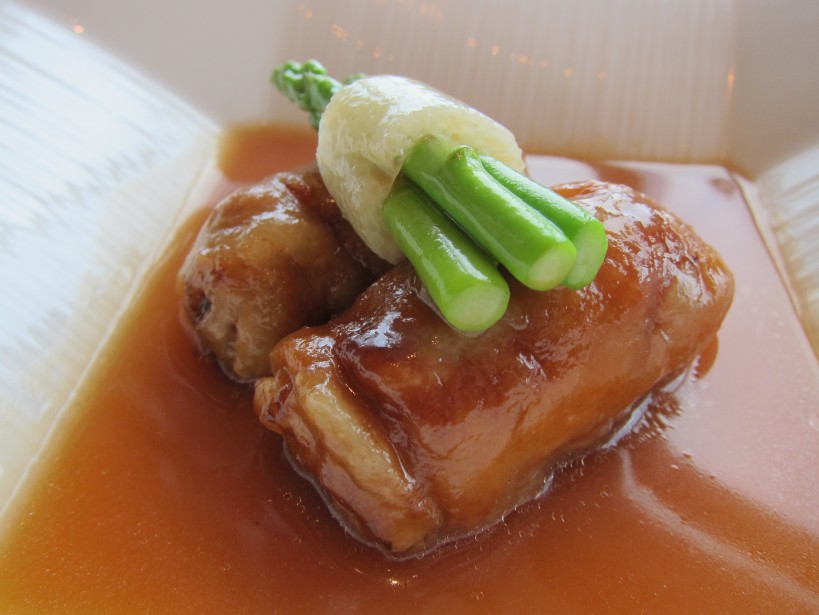 To end we had a trio of little desserts- chilled milk jelly with black truffle, traditional baked custard tart with bird’s nest and a deep-fried sesame dumpling filled with egg custard. My favourite was the sesame dumpling. I loved the crisp exterior and the egg custard was wonderfully hot and buttery, with that fantastic sweet yet slightly salty tang to it. The black truffle with the milk jelly was unusual but an interesting flavor which gave the refreshing jelly some depth.

Tin Lung Heen is the place to go if you want to impress first time visitors to Hong Kong and wow them with the views and treat them to an elegant meal. I’m confident it’ll be hanging on to its Michelin star, but it’ll be interesting to see what else Chef Lau can conjure up in the future, and if it’ll be climbing to dizzier heights.