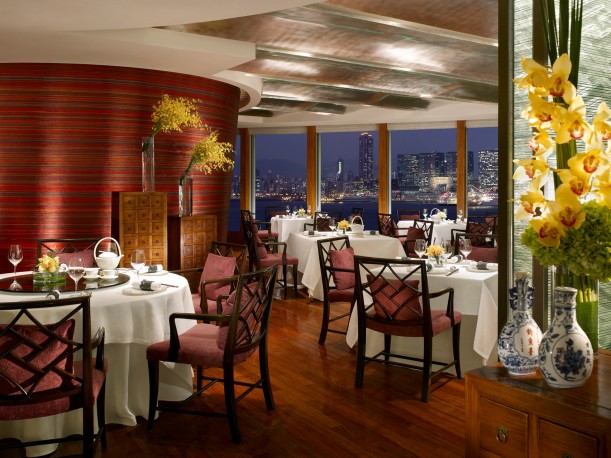 There are some restaurants in our beloved, hectic city that I have been saving for a special occasion or just waiting for a good time to go with my other half and visitors, and Lung King Heen at The Four Seasons is way up there on that *special occasion* list. But there it languished for a couple of years, until I despaired that such an occasion would ever materialise until, to my surprise, The Four Seasons extended a very kind invitation to me to try their set lunch one weekday. They were equally surprised that I hadn’t as yet been to their Three-Michelin starred restaurant, (I wasn’t deliberately avoiding, honest!), so it was with great delight that I found myself gazing round their spacious dining-area with polished floors, plush seats and magnificent views of Victoria Harbour.

Now, to be crowned the world’s first Chinese restaurant to be awarded the Three-Michelin stars is no mean feat, so naturally, one wonders if it deserves such an accolade. Although I was invited, I do believe that day to day, invites make little difference, as this is a tightly run ship with stellar service and truly standout dishes at what are frankly, quite reasonable prices for the quality that one gets. 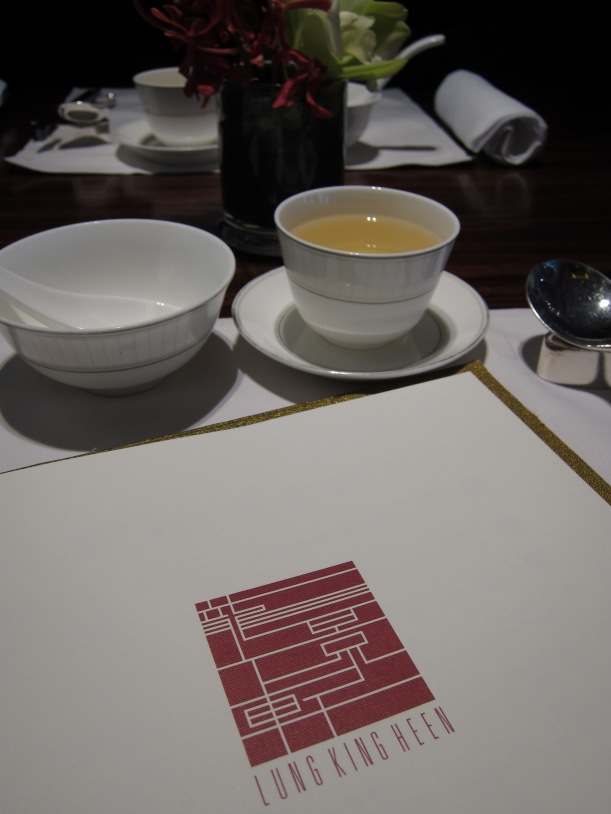 After nestling into one of their side booths I had a look at their Executive Set Lunch menu which, at $485 +10% per person for seven, albeit small courses, is GREAT value, especially once I started tucking in. The a la carte menu has an array of fabulous dishes and of course they have a fine selection of dim sum, being Cantonese and all, so if a tummy full of dim sum tickles your fancy then you should definitely do that at leisure. I was trying their set lunch which starts with the Chef’s dim sum selection followed by the Soup of the Day, Barbecue combination (highlight for any pork belly obsessive), two mains (more on those later), then dessert and petit fours.

Our attentive wait staff soon arrived and two neat, steamed dim sum parcels appeared before me- the mushroom dumpling with celery and the shrimp dumpling with bamboo shoots. They were both morsels of joy and deliciousness and not nearly enough to satiate my dim sum lust that they ignited. Their dim sum skins were delicate yet firm enough to hold their contents, and as they yielded to bite, I savoured the plump shrimp and tender bamboo shoots and the silky and flavoursome mushrooms, with the celery adding a fresh taste. I was also treated to their wonderful Crispy Spring Rolls with Shrimp and Hairy Gourd, which made that happy crispy sound as I bit into it. 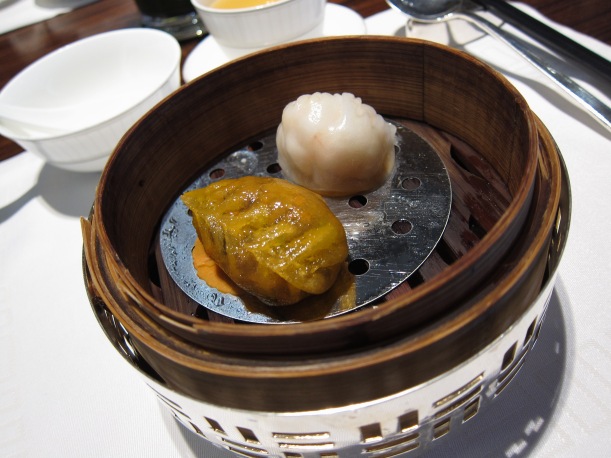 The Soup of the Day of dried vegetable, snake- head fish and pork, may not sound or look that impressive, but it was a wonderful, soothing broth to warm the cockles of the heart. As a Chinese soup fan, I fully appreciate the fine art that can go into a simple, humble soup, and I really wanted to produce a thermos and take some home!

Soup of the Day

Lung King Heen’s Barbecue combination may be small but they made an impact. And also made me want to weep that there was not more. (Am definitely having a plateful of crispy pork belly next time). My salivary glands were going into overtime and I had to tell myself not to wolf down my two precious pieces of pork belly and the equally magnificent two pieces of roast goose. The roast goose skin glistened delicately with the delicious goose fat; it was pretty much barbecued meat porn. But let’s not forget the marinated jellyfish with its yummy, crunchy texture, which was good but paled in comparison to its meaty neighbours. 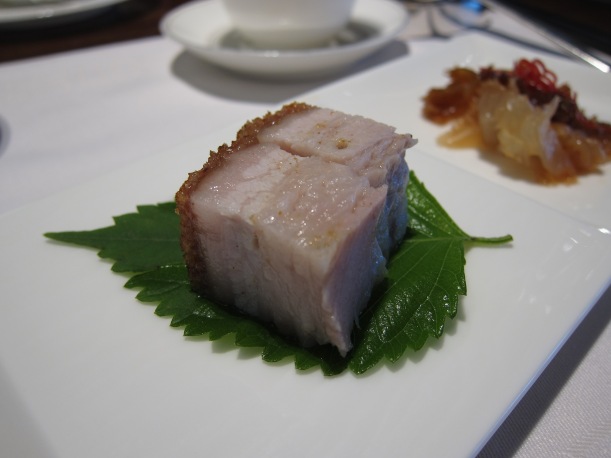 The next dish is a little controversial, as I soon found out after tweeting a picture of this dish enthusiastically, in that the so-called “Chilean Seabass”, is actually the Patagonian Toothfish, cleverly marketed to make it appear more appealing, in name, to us mere mortals and not only that, it seems to be a fish that is teetering on the edge of sustainable, depending on whether you want to wade in on the ‘legal fishing’ debate. I was educated very swiftly by Wafflerica – thanks! Anyway, this awkwardness aside, this dish (Steamed Chilean Seabass with with Fermented Black Bean Sauce) was outstanding, the fish was amazingly fresh, meaty and succulent and I loved the fermented black bean sauce, which is always such a dynamic contrast in flavours to that ‘clean’ fish taste. 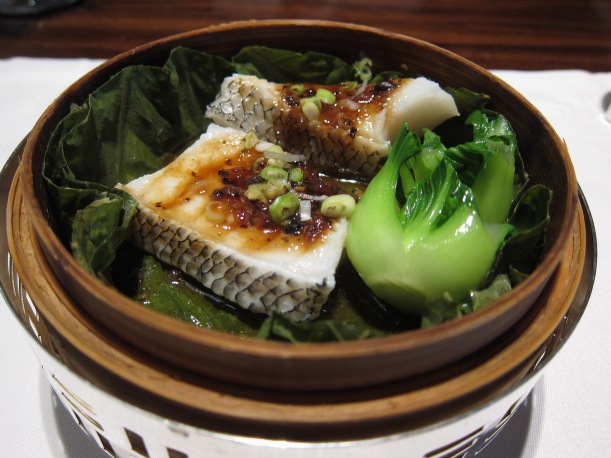 Next up was the welcome sight of the Braised E-Fu noodles with crab-meat in lobster sauce. Crab meat AND lobster sauce? Winning combination. I ate it so fast, such was my pure enjoyment of this dish, that I was not really registering any deeper analytics of the dish except YUM!

And so we were coming to end of this excellent lunch, and I had to make room for one of my favourite Chinese desserts of all time- the Chilled Mango and Sago Cream with Pomelo. Deconstructing this, there is basically a glorious mango pudding, firm and inviting, drowned in a fresh mango-sago-pomelo cream. Fruity fun. 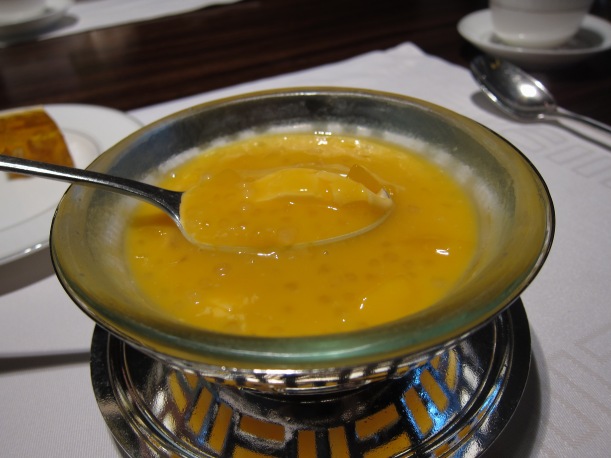 To end, there was a lovely Chrysanthemum jelly with barley and a sesame biscuit to cap off an impressive lunch. Three-stars absolutely well deserved.

Chrysanthemum jelly with barley and a sesame biscuit

As the Terminator said- I’ll be back.

This meal was by invitation- many thanks to Four Seasons Hong Kong. (Interior photos also from Four Seasons. )